Listen all you bloggers, I’m cutting straight to the chase. None of this witty banter anymore . . . this is the real deal. Pong is taking this movie right into the last few minutes of deadline. Yes, in case you didn’t know, today is the 14th of April and we’re still looking to film one more scene. Cutting it close right? I think so. But no, not only do we need to film this scene, we are going head to head with Mr. Falker in this turf war over the auditorium. I don’t think it’s any coincidence that film falls during lunch block. This is the mission: 20 minutes to film during Last lunch provided Falker is not within an earshot. I’m counting on Flatts’ stealth and time management to pull us through this minor crisis. Because if we don’t get this scene done, Flatts will be getting on that stage and he will explain to that crowd of 500 why there is a black screen in the middle of our movie. Will we get it done in time? The planets are all aligned but can we get it done? Until next time . . .

So the movie is due tomorrow and we still have one more scene ahead of us to film, other than that little issue the movie is going pretty well. Earle has provided us with some nasty beats for our dance scenes and we have every scene besides the one left to film finished. Filming on the day the movie is due may not be kosher but it works for the Pong crew. We’ll be pumped to finally get it burned of the dvd tomorrow. Check ya later. 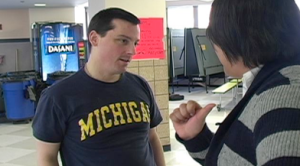 Filming is going well; however, scheduling in those last few scenes was a little difficult last week.  After talking to a chain of people, booking the auditorium, and getting Jean out of a department meeting (yes, we went that far) we have just the final two scenes ahead of us to shoot. The movie is coming along nicely thanks to our cooperating actors and our enthusiastic extras who have made fools of themselves for the sake of Pong. Right now we’re working on figuring out our music to go with the fantastic dance scenes. We’re expecting some sweet beats from Dono, but we have yet to hear them. Photo shoots with the actors have also taken place this week and the poster is in its final stages. Pong is shaping up nicely and we hope to have the rough cut soon. Check ya later  -Lime

Hello from crew Lime. It’s the middle of March and we are in the works of creating a fabulous movie. I’m more than satisfied about the buzz Pong has received. Mr. Kim, Mr. McCluskey and Mr. Jean have done everything we have asked for and it’s been nothing but great. Kudos to Mr. McCluskey because frankly I never thought he had the moves he does. Studies and various english classes have provided us with crucial extras that really make every scene, especially when we ask them to wear short shorts. And if anyone is thinking of using Mr. Kim in a movie next year, be aware that it is a struggle to keep a straight face when filming his scenes. Lime is one of the last crews to be wrapping up next week. Once we’re finished it is time crack down and make movies. Liz has generously created sequences that I can mess around with. I hope my skills can measure up to Flatts’ infamous editing. Peace out cub scout.

Over last summer, I was approached by several alumni from the past two years who all wanted to know one thing: what movie is Flats doing this year? The answer is Pong and Dance Man—and it is a monster. There are three tried-and-true elements of success for film festival movies: a strong faculty performance, a student club gone awry, and zany costumes. This film is brimming with all of them. Not only is Jean putting on the performance of a life time, but Kim and McCluskey are hilarious. Flats’ love of ping pong and his talent behind the camera are a perfect match for this movie. The only missing element is the dance, and that is where Liz and Lucia come in. Yes, they have the dance know-how, but more importantly they know how to handle Mr. Kim. I have seen their footage and so far it does not disappoint. This is not an easy film to shoot—every scene is a challenge. This is also the film festival’s biggest budget film to date. McCluskey’s wood shop students built a huge set that took weeks to complete for one of the big dance scenes. The Buzz continues to be huge around this movie.

Buzz Analysis: Two Venti cups of hot black coffee with a shot of espresso as a chaser.

Our first day of planned shooting didn’t really work out the way it was supposed. I have been working my butt off and coming up with some pretty sick songs for this movie. Mike and I had set up the ping pong table in the cafeteria and as soon as we were ready to shoot, Jean had left his ping pong stuff at his house. We had recently just got our costumes for our actors, but we currently don’t have our main actors. Merrigan was supposed to play James, but at the last moment decided that acting wasn’t his thing. We had found out that Adam and Sonny would be taking the positions of our last two main actors spots. Mike had just sent a text to Sonny, and now we don’t even know if he is going to be in our film. This is just another obstacle that we have to try to get by. To add on to all of this, we had just found out that Adam has wrestling, which just makes our scheduling a lot harder. We have to shoot all of our scenes after school, which makes making this film a lot harder because I usually have to work after school. Jean has been a great “cheerleader” for the crew team of Lime. We had a meeting the other day instead of shooting our first scene, and during the meeting Jean couldn’t stop laughing and telling us that we are going to make a great movie. I love working with Jean and the crew I’m on because we always have a good time and always have a laugh with Jean.The costumes we got are going to look hilarious on our actors, especially because they are spandex. I feel kinda sorry for Jean because the outfit we picked out for him is  “ a little too tight”, well so he says. I personally think he likes the outfit but we won’t get into that. We have already had to reschedule all of our stuff about three times. This is my first time working on a feature length movie, but working with Busted had helped me out a lot, especially because I’m still working with Lucia and Liz. There is a lot of work that needs to be done on this movie to make it perfect, but i am going to do the best i can to help out the Lime crew. 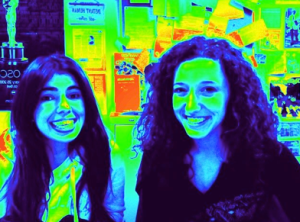 Hi Everyone! This is our second week of filming for Pong. Things are going well so far. Yesterday we filmed our scene with Mr. Kim and the dancers. Mr. Kim once again showed how hilarious he truly is. He brought in many of his own additions to add to his costumes, which in themselves were histerical. Kim then went on to give his best performance yet, showing immense aptitude portraying the arrogance needed for the shot. Also, the scene included Kim having to eat fig newtons; however, as the difficult actor he is, he refused to actually eat the newtons and constantly spit them out. In that one scene we went through an entire box of fig newtons. Next week should be a big week for us as we are shooting after midyear exams. Our entire crew is extremely excited. bye. 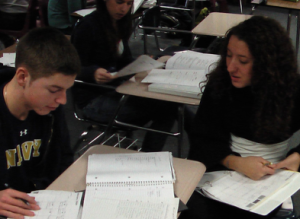 Our pre-production is well under way, with scheduling becoming a crucial part of the process because of the difficult issues between Mr. Kim and booking the auditorium.  Greg has been pumping out some tunes and more coming from Donovan.  There is one scene, however, which has given me nightmares and the mere thought gives lime the shakes.  No, it is not the scene with a huge set and magically floating ping pong balls (only to be destroyed), it is the crucial ending with Mr. St. Martin.  For those unaware, St. Martin was “snubbed” from a role earlier in the year as the main actor from The Classroom by, yes, myself.  I am working on the proposition to St. Martin in asking him to act in the important ending of the movie and put our differences from the past aside.  Lime has accepted to blow our budget out of the water to keep the man happy and keep him from simply looking at the camera and saying, “Why don’t you go get Mr. Braccini?”  Updates to come…

A majority of my crew is off today on a field trip leaving me with all the pre-pro work. I would label those 3, Flats, Lucia and Liz, as the inner circle of the Lime Crew. As a Film I newbie, I haven’t yet established my ground. I get stuck with jobs like photocopying scripts and running them to teachers. I wouldn’t call those the most challenging tasks but I guess that is a part of the Walpole High Film Festival totem pole. I’m at the bottom, for now and maybe in a few months I can be chilling at the top with Flats and Liz.